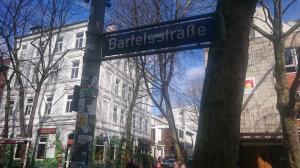 I lived on Bartelstrasse in the middle of Hamburg’s Schanzenviertel for a while, right next to the railway line. Every 10 minutes, the S-Bahn trundles by. You could only watch TV with the remote control in your hand, sliding up the volume to compensate for the cacophony of wheels on iron tracks whenever trains from the U3/S11/S21/S31 roared by. We woke up regularly, once a year, to the almighty screech of the tracks themselves being cleaned with what I imagined must have been relentless, scratchy steel wool, advancing down the tracks, in an army of wiry tumbleweed.
Back in the late 80s and 90s, Schanzenviertel was a wild blaze of graffiti, alternative music & political activists, travellers & punks: people. People who simply lived here, worked here, and in between them the homeless people, drug addicts… It was here my daughter started school. I used to hang out of the window, watching her bob down the road underneath the railway bridge. Watching her go. Smiling at her slight frame with that huge German school satchel perched on her shoulders. She’d pass people wrapped in rags and sleeping bags, sheltering underneath the bridge, to her school, Altonaer Strasse, around the corner.
Schulterblatt is the “shoulder blade” that takes you out of cozy Eimsbüttel into the strapping heart of the Schanze, connecting you to Pferdemarkt and the start of St. Pauli. The sound when you drove onto the cobbles of Schulterblatt somehow made it feel like you were accelerating, into the fast, rougher pace of life on this street.
I went back last weekend. I loved living on Bartelstrasse. A place to fall madly in love. To write about in a song. Music, bars, stress, food, trouble. The edge. Now, though, I saw how gentrification is taking hold, wiping and smoothing away the edginess. Replacing it with expensive boutiques, designer-wear and tourists. It no longer felt authentic but had morphed into a mere model of what it used to be, staged, to attract the fat wallets and the shiny handbags of the new travellers.